Flushing my head down the blog.

Hello blogosphere! well whoever may chose to read, which is probably no one at the moment.

I resisted for some time, mostly because I am awful at updating this kind of thing and also because I am not sure I have anything interesting to say? but it seems par for the course for an illustrator to blog now and I have an online shop being made so a bit of unashamed self promotion won't go amiss.

This being my first blog I should perhaps explain, it's primarily an illustrator blog but then anyone who knows me knows I have a habit of straying from the point so I will most likely waffle on about all manner of unimportant things and also draw your attention to stuff I have found lurking in the darkest recesses of the web, down in the digital depths like weird fish who are rarely glimpsed by the human eye (see waffling already)

I will also update on my work and art. My websites are being updated and as I mentioned a shop being created where I will be selling prints and one off items of clothing, mostly recycled apparel which will have my illustrations incorporated into them. I'll keep you informed on that.

When I say web-site's' that is because I am a two faced, I live two lives, my own and that of my alter ego (and I don't even need to go into a phone box to change). Two aesthetics emerged from my folio over the years, whilst my illustrations headed in a more painterly direction I missed having a more photographic aesthetic and 'Spiral Studio' was born to appease the photographer in me. I fully intended to keep it a secret but the whole cloak & dagger approach was not for me (as my agent pointed out 'your not exactly Banksy' hehe! quite right he was too) and anyway it was never going to work, I could not reasonably expect my clients to call me mr Spiral when working in my nom de plume ... it would bring to mind all manner of super villain and I do have a cat. (see waffle, I can't help myself)

So anyway, this will act as a blog for both my 'Darren Hopes' and 'Spiral Studio' personas. Both sides of the same coin which is as it happens the title of a personal project I am working on at the moment. I'll keep you informed of that too but as a taster here are a couple of images from the set. The Spiral Studio image was also exhibited as part of a collective exhibition last year. 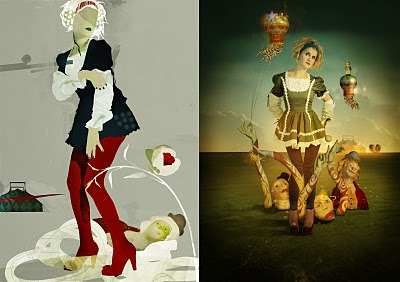 In the commercial world I have been busy, last year I think my spiral style had the lions share of the work but this year has seen the more painterly approach draw in the commissions. I recently completed a set of three illustrations for the lovely guys and girls at Souk, our end user was the May Fair Hotel. Having borrowed inspiration from the genius of Salvador Dalis Mae West the agency asked me to create three illustrations whereby a room from the hotel was also the face of a girl. Of course I lack the genius of Dali but I hope I make up for it in passion and enthusiasm. There were quite a few variables the face could not look too weird, the room needed to have specific elements, each image needed to be about something IE leisure, party, business but could not be overtly 'business' and each image had to have it's own personality, tricky but great to work on. Here's the first of the three ... 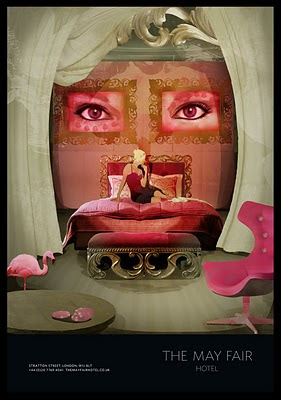 Tech head on ... new photoshop gets the thumbs up from me, you can't always be sure that the upgrade will be worth the money but this time I think it is. Puppet warp will be very useful to me and the new brushes are fantastic with the Wacom tablet although I still have a preference for real paint and pencils I can see a bit of digital paint creeping in. I still have not quite mastered drawing on the Wacom and usually head for my real world drawing board to sketch but the inclusion of a rotatable image tool in CS5 helps a fair bit. OK enough Techie stuff.

In other news we have a hung parliament, there is one very positive aspect to that, Robin Cooper used the opportunity to give the parties a call, go check it out.

I waffled didn't I!