Here is the image I recently created for the Southbank Centre to illustrate a performance of Hansel and Gretel by the kneehigh theatre that will be on over the Christmas period. The Kneehigh are actually based about ten minuets down the road from me, sadly I have not seen the production because it looks great from the snippets that I have caught on youtube ...

'full of merry grotesquerie' said the Guardian ... words I am certainly happy to read in any brief. 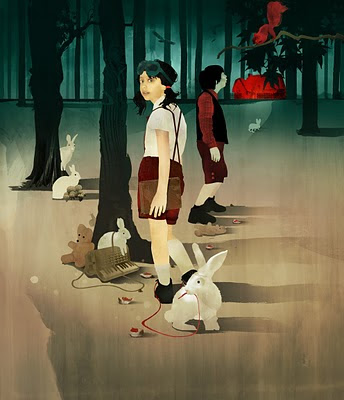 A little explanation for anyone who knows the play. Hansel should be holding the encyclopaedia and indeed in the version that will be used he is, I have just swapped it in my folio version for aesthetic purposes ... sorry Hansel!
Posted by darren hopes & spiral studio at 03:54 No comments:

I read today that the mathematician Benoit Mandelbrot had died.

Over the years, especially whilst at university he was a great inspiration to me. Along side developing my illustrative approach I worked on a more photographic personal project (I was after all studying photography) this project which remains very close to my heart was underpinned by Mandelbrot's fractal geometry of nature, I was particularly fascinated by the extent of self similarity in the natural world and how it appeared at the most far ends of scale from the universal to the sub atomic, it seemed to suggest something a little deeper than the science used to describe it and at the same time I was interested in the Tao Te Ching and I was struck by the similarities in the 'vein like structures' of Lao-tzu's Tao and Mandelbrot's maths in nature.

I eventually wrote my thesis on Fractal mathematics (bit odd for an art degree but it was so integral to my work it bore relevance) I had to write an academic piece so it was not as philosophical as I might have liked but nevertheless it bode well for my results and I have to thank the man for providing me with such a rich source of inspiration for my work.

I had developed a technique of non-camera photography, images made purely in the dark room, a bit beyond the pictogram as I had developed a way to photograph solid objects without a camera. I used this to explore small objects that showed Mandelbrot's maths at work in nature. Here are a couple of the resultant images, I would love to return to that quiet contemplation of simple yet infinitely complex objects one day. 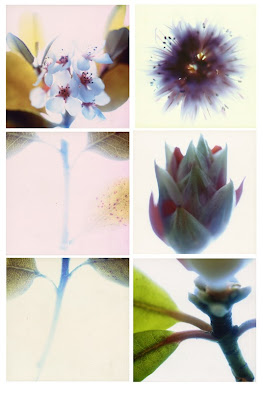 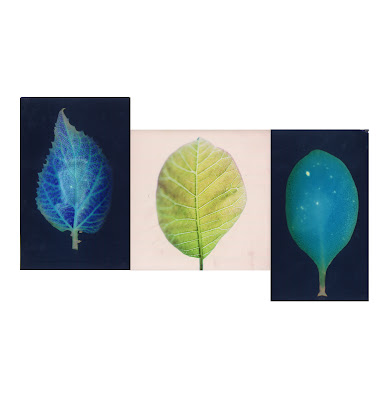 After university I took the philosophy of this work to the landscape as a whole and produced a series of landscapes which included small details in the fore presented in the wider landscape in an attempt to talk about self similarity at play in the landscape as whole. The same geometry being visible in the lichen on a rock as in the clouds in the sky or the shapes of the larger coastline having a similar pattern to the smaller rocks that make it.

Here are a few of those landscapes. 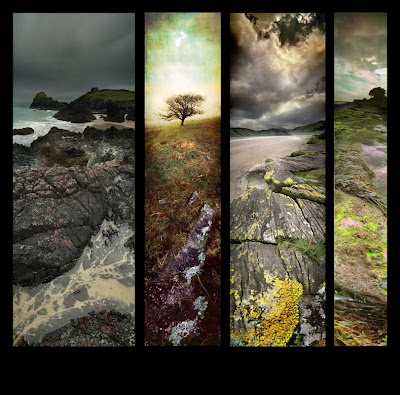 Goobye Benoit, thank-you for the inspiration and your beautiful mathematics, the world will never look quite the same to me since I read your theory.
Posted by darren hopes & spiral studio at 03:45 No comments:

This was going to be a longer post but I was in the midst of writing it when a job with a tightish deadline turned up (rather nice job, I will post the image once it's finished) so this is a somewhat abbreviated version, no great loss I suspect the original post was just my usual ramblings.

Here is the main image from the Sunday Telegraph commission I did recently, lovely commission with a completely open brief (always makes me smile when I am left to interpret the text myself) I produced about six roughs of which three were chosen which was great as I had only been commissioned to do two. The copy was about a young girl suffering from ocd. I was struck by situations she found herself in where she would become almost immobilised by the condition, trying to take a shower or, as I illustrated here, unable to go upstairs. I have often wondered if there is not a little of this condition in most of us, little quirks that it is hard to resist acting on, of course with ocd these compulsions are way out of control but I suspect that to a much lesser degree it exists in many people. 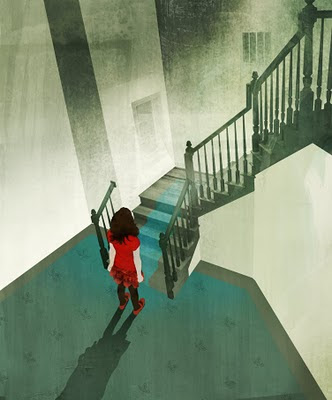