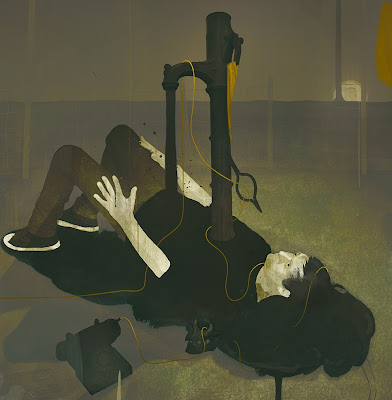 This is the fifth in the series. It is titled 'Slurry' which accompanies a very short poem by the same name.

As I mentioned in an earlier post I may leave this lot for a while as I intend on developing my landscape series, it is my longest running series and I have not done much with it for a while and, well, I feel like I need to get out of the studio a bit. That said, I was rooting through my notebook and came across a short poem that I wrote a couple of years ago that will lend itself well to the series I have been working on so there may be a sixth before I let this lot rest for a while, it will be returned to when I have produced some more writings to illustrate which as I said is a slow business for me!

I will post these with their texts, poems and flash fictions ... when I am feeling brave enough!