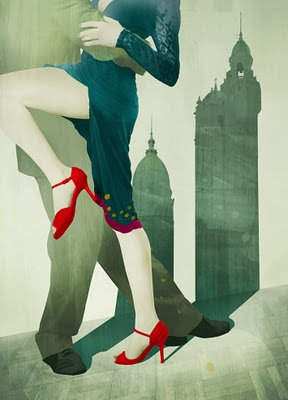 I have been working on a slow burner for the lovely guys at Studio 8. Over the past three months we have been creating a series of covers for Shop magazine. The project involved five illustrators working on around 40 covers, from what I have seen they have been creating some great work. I was initially commissioned seven covers which increased to nine.

The general premise was to take an iconic element of the given city or area and combine it to become a product ie a dress, a ring, a shoe ect

Here is the first of my nine solutions. This was Buenos Aires, I came up with a few ideas and produced two roughs form the list and this one was chosen to take to final, we took the cultural reference of the tango and the shadows of the dancers became the distinctive architecture of the city.

More to come soon
Posted by darren hopes & spiral studio at 01:33 No comments: 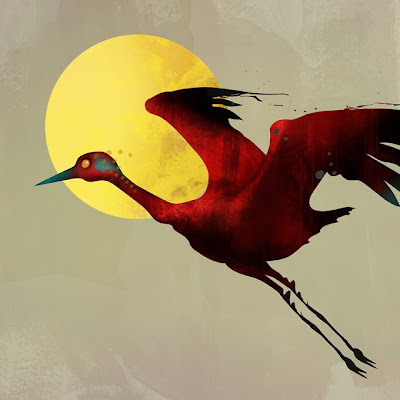 Here is an illustration I produced very quickly for a charity project called 1000 cranes to raise money and hope for the people of Japan who are facing what for much of the world can only be described as an unimaginable series of disasters.

For £2 you can download an illustration of your choice and create an origami crane from it using the included instructions. Why a crane? I'll let the guys from Anomaly (great name!) who's brainchild the project is explain -

'The Thousand Origami Cranes is an ancient Japanese legend which promises that anyone who folds a thousand origami cranes will be granted a wish by a crane, such as long life or recovery from illness or injury. The crane in Japan is one of the most holy creatures and is said to live for a thousand years. In Japan, it is commonly said that folding 1000 paper origami cranes makes a person's wish come true.'

The artworks on the site is growing so please do head over and have a look and get involved.


Bye for now.
Posted by darren hopes & spiral studio at 01:58 No comments: 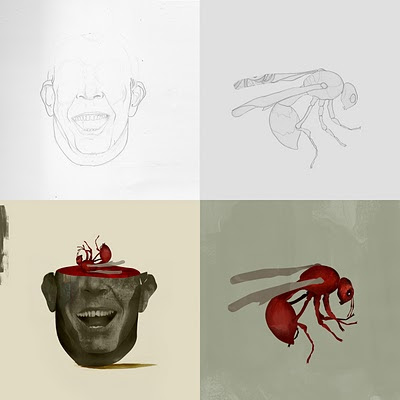 More experiments with pages scanned from my sketchbook, continuing to explore what happens when I omit any photographic elements from my approach. I have included the original sketches. It's a voyage of discovery and at the moment true to my mixed media origins I am chucking all sorts into the process to see what feels right. I prefer pencil and paper for drawing to the Wacom so that's where I start aside form that there is acrylic, watercolour a bit of digital painting and photoshop.

I don't intend to drop the photographic elements but I do want to really push the drawn stuff this year ... there's a big canvas sat in my studio ... who knows!